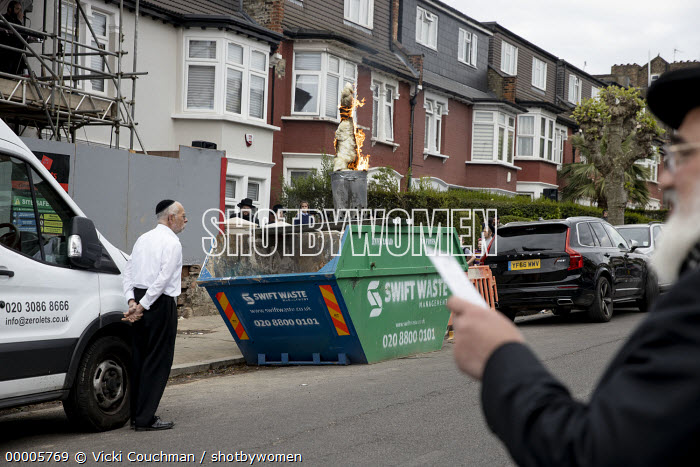 Vicki Couchman
Usage Licence History
Never Before
Country
United Kingdom
City
Amersham
Credit
© Vicki Couchman / shotbywomen
Title
Lag BaOmer
Caption
Fires are lit around the streets of South Tottenham Men and families dressed in traditional Jewish uniform read passages from books and sheets during celebrations and rituals of Lag B'Omer, a jewish festival.
South Tottenham Hasidic Jewish community celebrate Lag B'Omer outside their homes in the streets of 12th May on the last day of Lockdown
The celebration is the 33rd day of a mourning period known as the Counting of the Omer. The Counting of the Omer spans the 44 days between Passover and Shavuot.

There are different interpretations as to the significance and meaning of the Lag B'Omer celebration.

For some, it is a day of celebration that commemorates Rabbi Shimon bar Yochai revealing the deepest secrets of the Kabbalah.But other adherents believe that the festival is held on the anniversary of the ending of a plague that killed 24, 000 of Rabbi Akiva's disciples.
Creation date
9 May 2020
Reference
00005769
Part of
Albums
Availability
World wide
Rights
Royalty Free Rights Managed
Release
No Model release Model release Model release not applicable No Property release Property release Property release not applicable
Restrictions
Editorial only Editorial Commercial only Commercial Not available in your territory () Some restrictions apply but the file is available for download Delivery of this file is blocked Immediate download blocked Not available to agents
High res
6720 x 4480pixels
3 MBsize on disk
0.00
Hide keywords Show keywords